What We Can Learn From The Israeli Prime Minister’s Address To The U.S Congress

This article is part of The Critique’s exclusive The Great War Series Part 1: Gaza, Isis and The Ukraine

Much has been said about Israeli Prime Minister Benjamin Netanyahu’s recent speech before Congress. We heard that speaker Boehner’s invitation of Netanyahu violated protocol, that it snubbed the White House, that it inappropriately involved a foreign leader in an American debate, that it inappropriately involved Congress in a foreign election, that it irreparably damaged the Special Relation between the two countries, that it provided ammunition to those who argue that Israel projects undue influence in Washington.

The emphasis on whether Netanyahu should have come to Washington is misplaced. If the Israeli Prime Minister had something to say about a question he judged absolutely crucial for the national interest of his country, and if he was invited to say it in front of a prominent forum, he had a responsibility to say it, protocol be dammed.

All branches of American government regularly intervene in the politics of other countries. And anyone anywhere who can meddle in American politics to promote her vital interests does so. The special relationship has known bad times before (President Bush Senior and Prime Minister Shamir did not care much for each other) and has emerged in tact.

If Israel had magical influence over American policy the Obama administration would not be censuring it regularly and would not be making overtures towards Iran in the first place. Israeli Prime Ministers on the left have taken similar measures (one thinks of Shimon Peres’ visit to Washington immediately before the 1996 Israeli election, which was- history has a cruel sense of humor – criticized by Netanyahu in the same terms he is now being subjected to).

And every American president in living memory has taken advantage of a grave moment for political gain. The handwringing on this is a bit surprising. Netanyahu should have gone to speak to Congress. His conscience compelled him to do so and there is no law of nature that requires his political interests to contradict his beliefs.

“If the Israeli Prime Minister had something to say about a question he judged absolutely crucial for the national interest of his country, and if he was invited to say it in front of a prominent forum, he had a responsibility to say it, protocol be dammed”

The trouble is not that Netanyahu came to Washington. It is that what he said there was ignorant, wrong and dangerous. I will not focus on the Prime Minister’s warnings about the pace and extent of Iran’s nuclear progress, or on his worries about the emerging deal Secretary Kerry is negotiating. Others have already taken up these questions.

Rather, I would like to concentrate on Netanyahu’s broader view of Political Islam – on his penchant for grouping together all versions of it, molding them, like so many piece of play dough, into one seamless, ever-expanding threat. Since this view is echoed by significant parts of the American political and security establishments, it is especially important to subject it to critical reflection.

In his most recent speech Netanyahu argued that

“Ladies and Gentlemen, Would you let ISIS enrich uranium? Would you let ISIS build a heavy water reactor? Would you let ISIS develop intercontinental ballistic missiles? Of course you wouldn’t. Then you mustn’t let the Islamic State of Iran do those things either…The fight against militant Islam is indivisible. When militant Islam succeeds anywhere, it’s emboldened everywhere. When it suffers a blow in one place, it’s set back in every place. That’s why Israel’s fight against Hamas is not just our fight. It’s your fight. Israel is fighting a fanaticism today that your countries may be forced to fight tomorrow”

The language of synthesis and unification Netanyahu employs recalls the terms that Paul Nitze used to urge combatting communism everywhere it made an appearance. Nitze, Chief of Policy Planning in the State Department between 1950-1953, was responsible for drafting NSC 68, the report that, more than any other document, shaped American Cold War strategy.

The paper argued for pushing back against communist power anywhere it popped up. Communism was communism, and all its varieties expressed the same malicious ill designs against the United States. As the great historian of the Cold War, John Lewis Gaddis, describes it NSC 68 “exaggerated the threats the United States confronted… it rejected distinctions between vital and peripheral interests, emphasizing instead the damaging psychological effects of losing even remote regions to communism.” 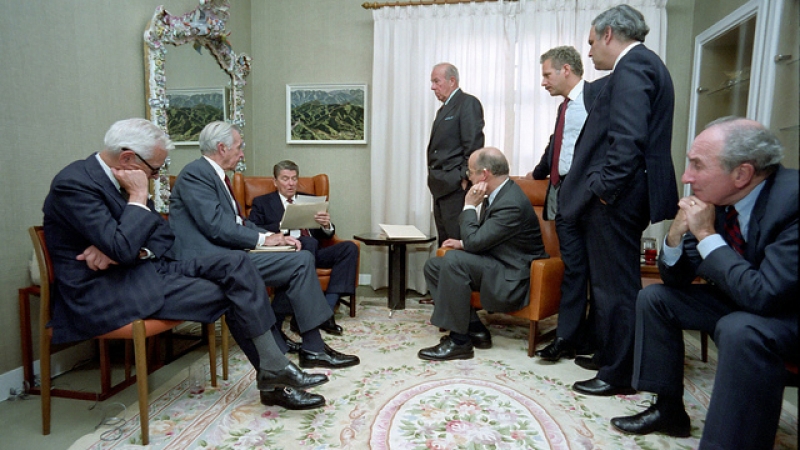 The same tendency to fuse, the same impulse to group together a family of competing ideologies as representing a single threat is evident in the rhetoric of both men. Iran, Hamas, ISIS and other organizations do not have the same ambitions. Each of them has different political and religious commitments. Each of them is subject to internal tensions as well as to domestic political restrictions. Yes, they are all dangerous – but to different extents and in different ways and each displays varying degrees of ideological rigidity. Netanyahu should have exploited the differences between the factions he enumerated rather than provide them with an excuse to come together.

Take Hamas for example. The organization suffers from severe tensions between its domestic leadership in the Gaza strip and its foreign leadership in Qatar. Furthermore, there is serious ill will between its military and political leadership inside Gaza itself, the former often trying to dictate policy to the latter. And this is before we even started enumerating Iran’s internal tensions or the tensions and differences in interests and religious commitments between Hamas and Iran.

Why impose a fake uniformity on these players rather than study them carefully and learn to manipulate the cracks between them as well as the fissures internal to each for one’s own advantage? This was, in essence, the position of George Kennan, Nitze’s friend, intellectual rival, and predecessor as Chief of Policy Planning. Where Nitze sought to unify and smooth over, Kennan insisted on parsing, analyzing and breaking apart the Communist world.

Soviet communism was different from Yugoslav communism and both were different from other varieties found in China, central and Eastern Europe. Seeing all of these as one mammoth entity was not only ignorant, it also meant that the United States was missing opportunities to divide and conquer – weaken its adversaries by drawing the more moderate ones towards itself and isolating the more extreme ones.

“Why impose a fake uniformity on these players rather than study them carefully and learn to manipulate the cracks between them as well as the fissures internal to each for one’s own advantage?”

Both men offered a theory of containment. Nitze’s was a game of wackamo played on a massive scale – badgering communism wherever it raised its head. Kennan’s conception called for a competition that was primarily cultural and philosophical– the west would exploit differences in interest and commitment between communist states as well as lacunae in Soviet ideology to isolate the USSR and buy time. During that time it could successfully compete with Communists regimes on who could offer a more satisfying form of life.

To its detriment, America chose Nitze’s simple-minded and militarized version of containment to guide the Cold War, a choice that resulted in the Vietnam War and a series of other bloody engagements. Prime Minister Netanyahu is now urging us to go down that path again. He is trying to convince us that the threat we are facing is indivisible. That it can only be overcome by unwavering pushback. This is ignorant nonsense.

We are facing a variety of threats, not all of them serious, and the overall risk can be reduced by becoming very deeply informed about the differences in ideology, commitment and interest between various manifestations of political Islam. The fight against its most radical forms will require, in Kennan’s words, “long and patient containment” based on the same kind of historical, political and cultural nuance that he brought to the study of Soviet Russia. Netanyahu owed it to himself and his people to appear before Congress earlier this March. We owe it to ourselves to reject the misguided univocal approach to political Islam he had to offer.

Nir Eisikovits
Nir Eisikovits is Associate Professor of Legal and Political Philosophy at Suffolk University in Boston, where he also directs the Program in Ethics and Public Policy. His writing and teaching focus on questions of transitional justice and the ethics of war. Nir’s first book, Sympathizing with the Enemy: Reconciliation, Transitional Justice, Negotiation was published by Brill. His second book, Kill Me Tomorrow: A Theory of Truces is due out later this year with Palgrave Macmillan. Nir is also co-editor of a recent collection of essays, Theorizing Transitional Justice, out this year with Ashgate and guest editor of a special issue of Theoria, forthcoming later this year, on The Idea of Peace in the Age of Asymmetrical Conflict.
Recent Posts