This article is part of The Critique’s exclusive Black Lives Matter: The Problem of Race and Police Ethics.

On 9 August 2014, 18 year-old Michael Brown was shot and killed by Ferguson, Missouri, police officer Darren Wilson. In the weeks following, thousands of people took to the streets, and to the internet, in very different forms of protest.

The background behind the myriad of protests includes the conflicting reports on what happened at the time of the shooting, the Ferguson police department’s initial refusal to release the name of the officer who killed Michael Brown, the fact that Darren Wilson did not complete an incident report with any narrative detail, the fact that the incident was not radioed in for 45 minutes, the police refusal to let Michael Brown’s family go near his body, and the interference with journalistic reporting of the protests.

The background is further complicated by the fact that the victim of the fatal police shooting was a young black man. According to ProPublica, young black men are 21 times more likely to be shot by the police than their white counterparts in the US. The racial dimension of this event is further emphasised by the fact that Ferguson police had only three black officers out of 53, in an area that is two-thirds black.

Many of the street protests were peaceful, and often involved protesters holding their hands in the air or waving signs saying ‘Hands up! Don’t shoot!’ On the evening of the fatal shooting, flowers and candles were placed as a memorial on the street where Michael Brown was killed. This memorial was reportedly urinated on by a police dog and later driven over by police cars to the distress of onlookers. 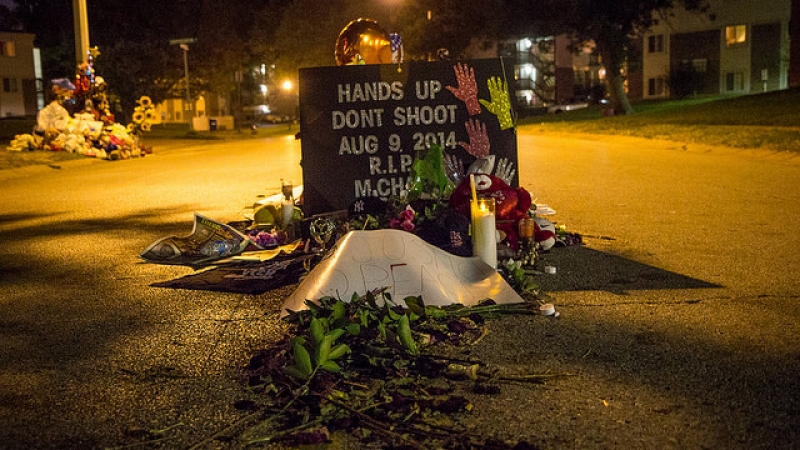 The next day, peaceful memorials were held in Ferguson, but in the evening, after a candlelight vigil, some people became rowdy, vandalizing cars, looting a dozen local stores, and setting fire to a gas station. There were also confrontations with the approximately 150 police officers outfitted in riot gear and armed with semi-autonomic weapons that were pointed at demonstrators, who tried to block off various parts of the city.

Police then used tear gas, stun grenades, and rubber bullets on protesters to disperse people standing near the burnt shell of the gas station. Later, law enforcement officers introduced the five second rule, which prevented protesters from standing still without facing arrest, unless they were protesting at the approved assembly area. In the twelve days following the death of Michael Brown, 132 people were arrested for refusing to disperse. In many cases, it is unclear whether officers issued an order to disperse, whether the order was lawful, and whether these facts were made clear to protesters in advance.

Ten days after the shooting, Missouri State Reps. Sharon Pace and Tommie Pierson stood near the local McDonald’s observing a march of about 100 protesters, with the aim of mediating between their constituents and law enforcement. Reportedly, there was a visible police presence, but a peaceful tone. According to Mother Jones, ‘Police officers approached and ordered the crowd to keep moving. A female Missouri Highway Patrol officer confronted Pierson, reaching for her mace. “Are you getting ready to mace me?” Pierson asked in disbelief. The officer backed off after Pace explained to another cop who they were.’

Human rights observers and journalists covering the protests were also tear-gassed and shot at with rubber bullets. On August 19, a video was filmed of a police officer approaching a group of journalists with his rifle pointed at them, shouting ‘I’m going to fucking kill you! Get back, get back.’

There were some incidents of violence by a minority of protesters also. Some protesters reportedly threw stones at police. Some threw bottles. Some threw Molotov cocktails. According to the Washington Post, on the internet, the hacking group Anonymous began to target St Louis County police chief Jon Belmar, posting his home address and phone number on Twitter followed by photos of him and his wife, and of what was reportedly someone sleeping on a couch inside his house. Anonymous threatened that, if police harmed protesters, they would attack the city’s servers, phones, computers, taking them offline, which they then did.

Further violence erupted following the announcement, on November 24, that police officer Darren Wilson would not face criminal charges for his shooting of Michael Brown. Prompted by this, some protesters burned police cars, smashed windows, and threw bricks.

As the protests continued, and became violent, Michael Brown’s family issued a statement condemning the violence: ‘Answering violence with violence is not the appropriate reaction. Let’s not just make noise, let’s make a difference.’

Martin Luther King Jr and Malcolm X, both sons of African American preachers, differed in the goals they sought and the strategies they used to pursue them. King became a leader in non-violent direct action and interracial cooperation. By contrast, Malcolm X developed a position of armed self-defence and exclusive all-black nationalism.

King, like Gandhi before him, and like Aung San Suu Kyi and many others after him, is revered for his use of self-restrained, peaceful civil disobedience. One way to understand the qualifiercivil in civil disobedience is in terms of dissenters’ conscientiousness, that is, their well-intentioned self-restrained efforts to communicate through modest breaches of law their opposition to a law, practice, or policy.

The Reverend Martin Luther King Jr. on Malcolm X's criticism of his philosophy.

The protesters in Ferguson who remained peaceful despite the draconian responses of police honoured the best spirit of civil participation. Emphasising these similarities, Rev. Jamal Bryantsaid ‘Ferguson is the Selma of my generation’, referring to the Alabama town where King led a landmark march in 1965.

Civil disobedience, like all forms of civilised participation, requires consistency and conviction, certainly, but also a sincere wish to communicate through dialogue the depth of that conviction and the desire for remedy, reparation, and lasting change. Such self-restrained dialogic efforts support the dissenter’s claim that her cause is defensible; she believes that it can be defended through reason-giving and she is prepared to give those reasons when the opportunity arises.

In this respect, those who protested peacefully contrast sharply with those who engaged in looting, seemingly gratuitous vandalism, property damage and violence. Those who engaged in these practices could not claim to meet these tests of conscientious conviction. And, although violence is not necessarily incompatible with civil disobedience, it is often hard to show that it has the features of conscientious, well-considered self-restraint that distinguish civil disobedience.

Violence changes the terms of engagement. It can force police to respond more harshly than they could or would do otherwise. It makes plans less noticeable. It can limit the options of judges. Peaceful protesters need to show a visible contrast between their conduct and that of people who use radical tactics; it is both strategically and morally important to convey a visible difference. Silent protests, sitting protests, and other visibly peaceful, non-confrontational protests are all ways for conscientious dissenters to distinguish themselves from radical agents.

King was very critical of Malcolm X’s advocacy of violence, which King saw as doomed to create nothing but grief. ‘Over the past few years I have consistently preached’, says King, ‘that non-violence demands that the means we use must be as pure as the ends we seek. I have tried to make clear that it is wrong to use immoral means to attain moral ends.’ (Letters from a Birmingham Jail, 1963)

But, perhaps things are not so simple. The threat of violence, and the inevitable increased media attention that it brings, often heightens both officials’ and the public’s awareness of an event. Under some circumstance, the threat of violence may be the most effective way to raise awareness. Under other circumstance, it may even be the only effective way to raise awareness. Indeed, remarking on this possibility, Malcolm X said once to King’s wife, Coretta, that ‘If white people realize what the alternative is, perhaps they will be more willing to hear Dr. King.’ That King did not welcome Malcolm X’s purported assistance suggests a consistency in King’s methods and ideals.

The possibility that Malcolm X smoothed the way for King’s pursuit of civil rights complicates the assessment of both activists’ conduct. It suggests that the one could remain pure in his mode of pursuit only because the other was there to do the more dirty work.

Against this, it could be argued that Malcolm X’s activism did not constitute a legitimate pursuit of democracy and equality since he advocated modes of action at odds with those ideals. For example, Malcolm X claimed that black Americans should achieve their emancipation throughwhatever means necessary (though there is little to suggest that he engaged in extreme activism himself). On this view, the violence Malcolm X incited remains an unjust means, even if it is used in support of a just end. Perhaps the same applies to the more radical forms of protest found in Missouri this past summer and fall?

Nevertheless, it is possible that Malcolm X did more for ideals of democracy and equality than did many activists who could claim with legitimacy to pursue those ideals peacefully and conscientiously since, as he himself said, Malcolm X made society aware of the alternatives to non-violence.

The same might be true in the Michael Brown case. Although the FBI and the US Justice Department claimed that the violence did not influence their decisions to investigate the case, after the protests started, the FBI began to investigate whether Michael Brown’s civil rights were violated and the Justice Department is now reviewing the Ferguson Police Department’s recent internal investigations into police use of force. Though this is not enough, by itself, to show that the violence in Missouri was either necessary or the most effective way to increase awareness of the death of Michael Brown, it may count in favour of this view.

The line between strategic violence and extremism is a fine one. If a society has meaningful, ordinary channels for dissent and participation, including both legal protest and civil disobedience, then people have a moral responsibility to use those channels. But, if a society closes those channels, and the police responses in Missouri suggest that this may have happened at different moments this past summer, then people are morally justified to resort to more radical measures in order to express their sincerely held convictions and to reclaim their rights to equal recognition and political participation.

Kimberley Brownlee
Kimberley Brownlee (First Class Hons BA in Philosophy, McGill; MPhil in Philosophy, Cambridge; DPhil in Philosophy, Oxford (Rhodes Scholar) is an Associate Professor of Legal and Moral Philosophy at the University of Warwick. Kimberley is the author of Conscience and Conviction: The Case for Civil Disobedience, published by Oxford University Press (2012). She is also the co-editor of Disability and Disadvantage, published by Oxford University Press (2009). Her articles have appeared in Philosophical Quarterly, Philosophical Studies, Ethics, Law and Philosophy, Utilitas, Oxford Journal of Legal Studies, Journal of Applied Philosophy, Criminal Law and Philosophy, and Res Publica. She is the author of the Stanford Encyclopedia of Philosophy entry on civil disobedience. Her work focuses on practical reason theory, human rights, conscience and conscientious disobedience, ideals and virtue, philosophy of punishment, and restorative justice.
Recent Posts