This article is part of The Critique’s exclusive The Great War Series Part I: Gaza, Isis and The Ukraine.

Philosophical reflection makes judgment difficult. This is especially true with regard to judgments about complex historical and political events such as war.  Philosophers should be quite careful in offering any definitive evaluation or recommendation of specific conflicts.

This is especially true with regard to conflicts in the Middle East, where political judgment is clouded by long decades of conflict and war.  Nonetheless, philosophers can clarify principles and points of view that provide critical insight. Philosophical pacifism offers a critique of such conflicts that is useful and sadly overlooked.

Pacifism can include a variety of commitments—from religiously based absolute pacifism to consequentialist approaches to contingent pacifism.  Absolute pacifists are opposed, in principle, to any and all violence.  Non-absolute pacifists may admit that violence could be justified in extreme cases, while claiming that usually such justifications are lacking.  Pacifists generally hold that nonviolent conflict resolution is preferred to war. And they are interested in imagining alternatives to violence and war.

Albert Einstein—a non-absolutist pacifist—argued that resort to brute force is unworthy of civilized people.  Einstein’s point is familiar to students of critical thinking who learn early on that might does not make right. Many details must be worked out with regard to moving beyond war: how to disarm antagonists, how to remedy historical injustice, and how to overcoming intolerance and distrust [Read Hughes on Forgiveness and Conflict].  Behind these details is the idea that we must move in a direction that sees war as a primitive and irrational way of resolving conflicts. 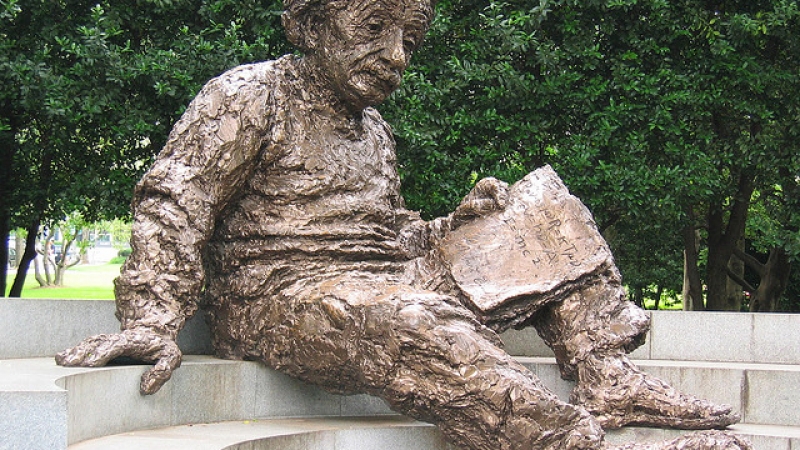 Adam Fagen/FlickrAlbert Einstein Memorial At The National Academy Of Sciences In Washington, DC

Pacifists cast a critical eye on violence, without privileging any point of view or political agenda. Einstein condemned both Nazi atrocities and the violence of early Zionism. Contemporary pacifists condemn non-state actors—terrorists, militants, and guerrilla fighters—as well as states that resort to violence. Such condemnations will often appeal to ideas that are found in just war theory.

On the one hand, terrorists who deliberately attack noncombatants violate the jus in bello principle of discrimination. Thus indiscriminate rocket fire, car bombs, and other terror tactics are wrong.

On the other hand, states who use indiscriminate bombing campaigns can also be condemned according to the same just war principles of discrimination and proportionality.

Behind the critical perspective provided by jus in bello principles, is the question of just cause. While response to aggression is generally held to be a justified cause, pacifists will point out that parties on rival sides can claim to be justified in their resort to force.

In recent conflicts in the Middle East, it is difficult to say that any side is entirely justified in resort to violence. There is aggression on multiple sides in these conflicts [Read Frowe on Just War and The 2014 Gaza Conflict].

One could argue that each party in these conflicts has some justification in opposing the apparent injustice of the other side. Pacifists worry that this signals a deep problem in the application of the just war theory which can be remedied by avoiding war altogether.

Consider, for a moment, the problem of ISIS in Syria and Iraq. ISIS is a subnational group that employs immoral tactics—including most notoriously, the beheading of journalists. One opponent of ISIS is the Syrian government, who has used immoral tactics in its battles, including using poison gas. Another part in the struggle is the U.S., who is now leading the fight against ISIS in Iraq.

But the U.S. can also be accused of immoral action in war: unjustly invading Iraq in 2003, using torture in that war, using depleted uranium weapons, and so on. The difficulty is that each side feels justified in resorting to violence against the other [Read Brunstetter on ISIS and Foreign Policy].

A further critique emerges from a consequentialist standpoint. Decades of wars in the Middle East have simply not produced good outcomes. Israel’s wars, for example, have only served to create antagonisms that lead to more war.

The U.S.’s wars and militant actions in Kuwait, Afghanistan, Iraq, Yemen, Somalia, Pakistan, Libya, and now Syria have not created stability or lasting peace. One unfortunate fact is that weaponry supplied by American forces ends up in the hands of militants and is then used against friendly states and American interests. A consequentialist can easily draw pacifist conclusions from the past several decades of war in the Middle East. War has not made the world safer or more peaceful.

Pacifists are also interested in variety of other concerns including: (1) understanding the psychological, sociological, cultural, economic, religious, and political roots of violence, (2) holding unjust warriors and political leaders on all sides as responsible for misdeeds, (3) inspiring people of conscience to stand up against war, (4) motivating nonviolent methods of conflict resolution, and (5) reiterating the absurdity of believing that “might makes right.”

“A consequentialist can easily draw pacifist conclusions from the past several decades of war in the Middle East. War has not made the world safer or more peaceful”

Consider, for a moment, the economic question of who profits from war. Pacifists will criticize war-systems in which profit is made by going to war. One example is found in American support for the Israeli military. Of the roughly $3 billion annually in U.S. military aid the majority must be spent on armaments manufactured by American firms.

This is true of most American military aid around the world. Israel is unique in being permitted to spend 25% of its annual subsidy on domestic armaments. In the summer of 2014, Israel received a special supplement of $225 million to repair its Iron Dome defense system, extensively used in the war against Gaza.

In the autumn of 2014, Raytheon—an American defense company—announced that it had made a deal with Israel worth $150 million to supply parts and components that will be used to rebuild the Iron Dome missile system.

Another example is the U.S. decision to supply weapons to moderate rebels in the Syrian conflict. According to Maplight—an organization that tracks lobbying in Washington—defense contractors gave more money to legislators who voted in favor of arming the Syrian rebels. The Chair of the House Armed Services Committee—Buck McKeon—sponsored the legislation to arm the Syrian rebels. Mr. McKeon has received more contributions from defense contractors than any other legislator.

Rather there is a systematic problem here that skews priorities and policy decisions. Defense contractors are closely tied to the Pentagon, to the media, and to the government through the revolving doors and echo-chambers of the military-industrial complex.

War profit muddies the moral waters. Pacifists note the irony of the new war against ISIS in which American bombs are used to destroy American equipment left behind from our previous intervention in Iraq. This absurdity still nets a profit for those who build the bombs and Humvees.

The questions of profit, interest, and power-politics take us well beyond the just war theory and its narrowly focused principles of moral assessment. Pacifists are interested in this broader critique of how social, economic, cultural, religious, and political structures create conditions in which war is more likely.

“Pacifists note the irony of the new war against ISIS in which American bombs are used to destroy American equipment left behind from our previous intervention in Iraq. This absurdity still nets a profit for those who build the bombs and Humvees”

Pacifists also encourage creative and sustained employment of nonviolent methods of solving social conflicts.  The strategies of active nonviolence were most famously developed by Gandhi and Martin Luther King, Jr.  These ideas have inspired the work of activists in the Middle East—both Palestinian hunger-strikers and Israeli refuseniks. The voices of nonviolence are few. But Gandhi and King remind us that they can be powerful.

Of course, there are serious impediments to peace in the Middle East. Machiavellian gamesmanship and complex political situations exist in Israel, Palestine, Syria, Iraq, Egypt, and even in the United States. Historical inertia, deep-seated distrust, and sectarian religious disputes exacerbate conflict.

Geo-political strategizing of the great powers provides another impediment, as does religious conflict, and economic interest. The issue of oil is obviously important, as the global petroleum economy depends upon the oil wealth of the region. All of this creates a crucible for conflict that is not amenable to the sort of moral analysis suggested by just war theory.

The pacifist’s solution is simply to say enough is enough—stop fighting, start disarming, and work to imagine a way to create a nonviolent future. One of the greatest impediments to peace is the idea that violence works and that it can easily be justified.

Defenders of justified violence claim that pacifism is feckless, other-worldly, cowardly, and even unjust. They will argue that pacifists are unwilling or unable to do what is necessary to keep the peace and promote justice in the real world. But the history of the Middle East points toward a different conclusion.

Long decades of war have not produced good outcomes. Instead, distrust, fear, injustice, and hatred grow, without resolution—while each side feels justified in resorting to violence.  The pacifist criticizes the entire edifice of warfare, condemns each side for their primitive reliance on violence, and exhorts us to imagine an alternative.

It is difficult to imagine building peace in a world torn by decades of war. But our current reliance on systems of war is not producing either justice or peace. The disheartening results of decades of warfare reiterate the pacifist conclusion that war is not the answer.

Let me conclude by quoting Einstein:

“whether we find the way of peace or continue along the old road of brute force, so unworthy of our civilization, depends on ourselves… Our fate will be according to our deserts.”

Andrew Fiala
Andrew Fiala,Ph.D., is Professor of Philosophy, Chair of the Philosophy Department, and Director of the Ethics Center at California State University, Fresno. He is co-author (with Barbara MacKinnon) of the 8th edition of the ethics textbook, Ethics: Theory and Contemporary Issues (Cengage Publishing, 2011) and he has published a number of monographs and articles on ethics, political philosophy, and issues in war and peace. His latest book is an edited volume, The Bloomsbury Companion to Political Philosophy (Bloomsbury Publishing, 2015).
Recent Posts